Preparing a bracket is relatively simple and takes only a bit of planning. Follow the steps below to create a cornhole tournament bracket.

This style is also called a knock-out, Olympic system tournament, or single penetration.

The elimination style you choose should reflect the number of teams involved in your tournament and the amount of time allotted for playing.

Once you have decided on the elimination style, you can create your bracket to reflect that elimination style. It is helpful to know how many teams will be playing while creating the bracket, but if you do not have an exact guess then estimate. You can either draw your own bracket or find a printable cornhole tournament bracket.

We have three printable cornhole tournament brackets available for free! Select one of the following: 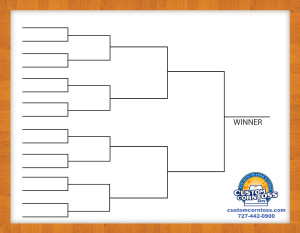 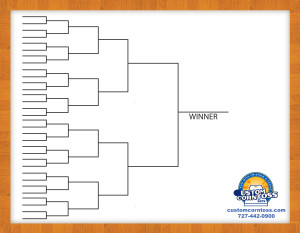 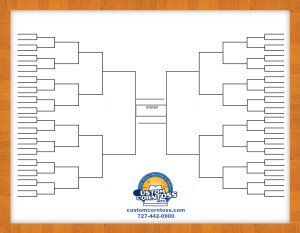 On the day of the tournament, it will be time to pair up the teams. If players in the tournament signed up as teams then you may skip this step.

However, if players have not yet made teams, then allow extra time for this step on the day of the tournament. You can either allow people to choose their partners or mix things up by putting every player’s name in a hat and drawing teams at random.

Now that you have a list of all of your teams, it is time to fill in the bracket.

If you need any extra cornhole supplies for your tournament, let us know. We have official cornhole boards and bags that are appropriate for any sanctioned tournament. Plus, we have several cornhole sets that are available for rent.