Cornhole: How to Keep Score

One of the best things about the ever-popular game of cornhole is that the equipment, game play, and cornhole scoring system are all simple. In this post we’ll give you a full run-down on how to play cornhole and how to keep score like a pro! For more information on how to play checkout our complete guide to cornhole which includes a section on cornhole rules. 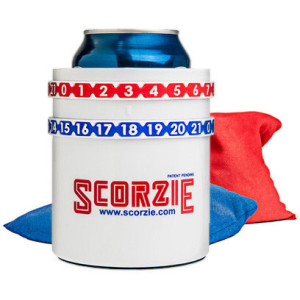 Before we get into the nitty-gritty of cornhole scoring, you need to be sure that your cornhole court is prepared correctly. Two cornhole boards should be set up facing each other and directly aligned, 27 feet apart.

Both teams get four bags that are different colors or distinguishable in some other way. The goal of the game is to be the first team to score 21 or more points. How points are scored is discussed in the next section.

Players toss one bag a time, alternating with their opponent until both teams have thrown all of their bags. Cornhole points are given as follows:

It is important to note that bags knocked in the hole during game play will count as a cornhole. Bags that land on the board but are knocked off will be a bag out-of-the-count and not score any corn hole points. These are important factors to consider when devising your cornhole tossing techniques.

Points are tallied at the end of each inning using cancellation scoring, meaning that points scored by both teams will cancel each other out.

For example, if Team A scores 5 points in the inning and Team B only scores 2 points, then the total points for that inning will be 3 points for Team A and none for Team B. Because Team A won the inning, Team A will be the first to toss in the next inning.

A game cannot end mid-inning. All players must have a chance to toss their bags before the final score is tallied.

Other Options for Scoring

How to keep score while playing cornhole is pretty simple, though some players choose to mix up the rules a bit with these different approaches to scoring. The following rules are optional if you want to make the game run longer or shorter, depending on the rule.

Cornhole is pretty simple, but there are quite a few ways that a foul can be called. Possible causes for a foul include:

Now that you know all about how to keep score like a pro, here are some essential terms to make you sound like a pro too!

If you are hosting a cornhole tournament, you’ll probably need an official way to track the score. Even unofficial cornhole events can benefit from a little scoring assistance, especially if adult beverages are involved!

There are plenty of options to choose from. Custom Corntoss has a score tower, score strips to attach to the cornhole boards and score koozies (you can find all these scoring tools with the other accessories in our shop). Other cornhole fanatics use scoring apps.

Do you have any other ideas for how to keep score or other cornhole terms that you use with your friends? Share with us in the comments below!