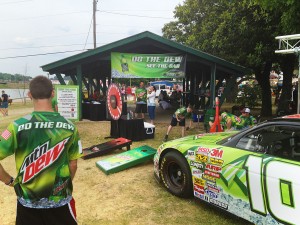 Loving cornhole is very similar to loving apple pie: it’s American, everyone adores it, and there are plenty of different ways to enjoy it.

For instance, have you ever eaten apple pie while enjoying the finer points of Shakespeare or Hemmingway? No? Well neither has anyone, probably.

The fact of the matter is that you could if you wanted to because it’s such a versatile dessert. The metaphor may have gotten a little out of hand there, but regardless, cornhole is awesome. Apple-pie-and-Shakespeare awesome.

It’s versatile, it’s fun, and it can be enjoyed in groups like so many of life’s greatest things. Just because the history of cornhole is shrouded in myth and legend, doesn’t mean your enjoyment of it has to be. The following are four simple ways to improve cornhole beyond its regular enjoyment level.

1. Try shooting at your targets.

Load up an old potato cannon or t-shirt cannon with your beanbag, and make your cornhole improvements even more EXTREME. You know, like the nineties. Everyone likes to reminisce about the nineties, right? Well now’s your chance to talk about gak, Nickelodeon, and grunge while playing the most extreme game of cornhole probably ever.

Think about it, bean bags propelled through the air at the speed of duck hunt, what more could you want?

If you can, try and pick up cheap cornhole boards and customize your bags as necessary. Just about everything is more fun when there’s drinking involved, but try to get the rules sorted out beforehand. Or not. You won’t remember them about halfway through the round anyway– at least not if you’re playing the game right. Try: in the hole, pass the drink to a person of your choosing, miss the hole and the shot’s yours!

3. What about roughhousing throughout the match.

Don’t lie, you’ve always wanted to bat down an opponent’s bag just before it gloriously sinks into the hole. Allowing for defensive moves is a great way to get more energy pumping throughout a match. But wait, there’s more!

Make it a free for all by throwing as many bags at once towards the hole after the round starts. Then all you need is some camo cornhole bags, and you’ll feel right at home in an impromptu Call of Duty setting. If you squint, anyway.

4. Scale every bit of equipment up.

This one might take more finagling on your end, but it would make for some wicked Facebook or Instagram pictures at least. In Voltron (tell me you remember that classic) fashion, gather lots of cornhole boards together into a mega-board, or just build a really really big one. Of course, you’ll also have to construct ultimate bean bags to toss, and there’s no rule saying you can’t use homemade catapults. But, uh, you should definitely consult a catapult expert for that, as a side note.

So thankfully for all of you cornhole enthusiasts out there, there are plenty of ways to improve cornhole that can keep things interesting and a bit off the wall. Keep on being rad, you party-animals.

And if you need any cornhole supplies to make all your wildest gaming dreams come true, let us know. We probably can’t help you with catapult construction, but everything else is within our wheelhouse!